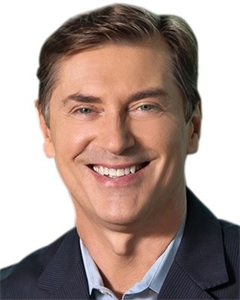 Request
An expert moderator and emcee, who can speak to the lessons of leadership learned over a 40-year career.

Having covered some of the most compelling and perplexing athletes and teams over the course of his four-decade career, Tom can share the invaluable leadership lessons he has learned along the way.

Speaker Bio Tacoma native Tom Glasgow has spent more than 40 years covering some of the biggest names and events in Seattle sports and beyond. He currently serves as Host on Seattle Kraken pre- and post-game shows and contributes to Seattle Mariners broadcasts on ROOT SPORTS.

He began his career directly from college as a sports producer at KIRO Radio for legendary broadcasters Pete Gross, Bob Blackburn and Wayne Cody. After more than 10 years on radio, Tom made the jump in front of the camera at KIRO TV as a sports anchor and reporter. His next stop was FOX Sports Net Northwest where he co-hosted the Emmy Award winning Northwest Sports Report and Pac-10 Tonight. He was also part of the team that won the Emmy for a live/unedited sports event for his play-by-play on the USC-WSU football game.

Tom is a charter inductee of the Mount Tahoma High School Hall of Fame in a class that also includes NFL star and broadcaster Ahmad Rashad, and former Dodgers 3rd baseman Ron Cey.

Overcoming the Odds - Success Beyond the Superstars

Over the course of 40 years covering the biggest names and biggest games in sports, veteran broadcaster Tom Glasgow has witnessed some incredibly inspiring moments. Many of those highlighting the value of team, from the superstars who get the glory to the role players who play a critical role in delivering victory.