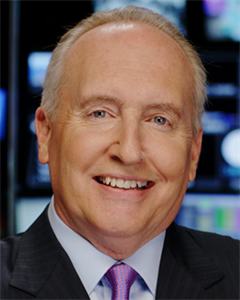 From former NFL player to sportscaster to award winning and highly respected news anchor at KIRO TV, Steve now focuses on his passions as the radio Voice of the Seattle Seahawks, and charitable causes.

A longtime broadcaster and original Seattle Seahawk, Steve Raible has been a fixture in the Pacific Northwest for almost half a century.

He was the trusted face and voice of KIRO-7 News for almost thirty years. And after retiring in 2020, the station named its news broadcast facility "The Steve Raible Studio".

Raible continues to be the "Voice of the Seahawks" as the team's radio play-by-play announcer, a job he's held since 2004. Before that, he filled the role of color analyst for 22 years. Raible has called the biggest games in franchise history, including the team's Super Bowl 48 Championship over the Denver Broncos.

During his time at the CBS affiliate, Raible anchored all the station's main daily newscasts, hosted Emmy-award winning documentaries, and led the news team's election coverage and major breaking news stories. He is a multiple Emmy Award winner, including Best Anchor. And for more than two decades was the Voice of KIRO-7's coverage of Seafair- Seattle's summer festival including Hydroplane races and the Blue Angels Air Show.

Raible entered broadcasting in 1982 following a six-year career as a wide receiver for the Seattle Seahawks. A second-round draft choice of the expansion franchise in 1976, Raible came to Seattle after graduating from Georgia Tech.

Steve has been married to his bride Sharon since 1981 and together they have helped raise millions of dollars for countless charities in the Northwest.

Game Planning for Your Future